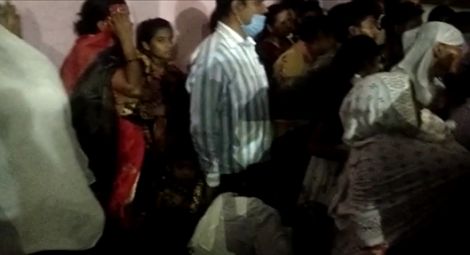 Some of the Christians attacked in Chhattisgarh

A group of more than 50 Christians who had gathered at a church member's house for a prayer meeting were attacked on 17 October in Raipur, in India’s Chhattisgarh state.

CSW sources report that villagers gathered around the house after the Christians had finished eating dinner together. The mob started harassing them, pressuring them to say Hindu chants like Jai Shri Ram (Hail Lord Ram). When the Christians refused to do so, members of the mob proceeded to assault them.

They then took the Christians to a stage that was prepared for the Dussehra festival, an important Hindu celebration. Local leaders from the Hindu nationalist Rashtriya Swayamsevak Sangh (RSS) and Shiv Sena groups were called upon and continued harassing the Christians. One man was kicked in the chest and back while a woman was forced to eat cow dung. Some women were also severely injured when the mob started throwing stones at them.

A few police officials arrived at the scene at around 8pm and tried to protect the Christians as the mob continued chanting and threatening them. he group, which included several women and children, were taken to the police station for protection at around 12pm.

FIR, which is required for the police to open up an investigation, was registered at a police station in Durg district. It claimed that the mob had harassed the Christians and damaged their vehicles. At around 4am the morning the Christians were sent back to their home.

There has been no further action taken so far, and the Christians continue to live in fear. Sources have recently reported that the vehicles belonging to the Christians are still at the police station and the officers have refused to return them, despite repeated requests by the families.

CSW's Founder President Mervyn Thomas said: “While we note that the police did attend the scene and attempt to protect the Christians who were being targeted in this incident, delays in taking them to safety, restoring their property and any sort of follow-up to the initial police report, have prolonged their ordeal unnecessarily. In both Chhattisgarh and its northern neighbour state of Uttar Pradesh there have been several incidents in which Christians have been attacked in recent months, but no action has been taken despite the completion of the requisite First Information Reports. We urge the Indian government to strengthen the police force to act on such cases and ensure that justice is guaranteed for all citizens, irrespective of their religious identity."