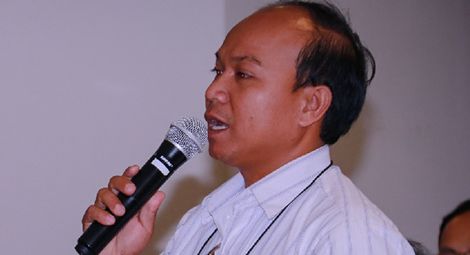 The difference you've made in 2020

Throughout the past year we’ve celebrated a series of amazing breakthroughs - and none of it would have been possible without you.

Despite the impact of the COVID-19 pandemic, which has made religious communities across the world more vulnerable and has exacerbated existing tensions, our God is still on the throne and is still answering the prayers of his people.

Your gifts, campaigning and prayers have seen captives released, unjust rulings overturned and families reunited! Your support is achieving real change for people who suffer injustice for their beliefs.

Both were released temporarily as part of efforts to control the rapid spread of COVID-19 in Iran’s prison system, and were subsequently informed that they did not need to return to complete their sentences.

Fatemeh Bakhteri (Aylar) was sentenced to one year in prison and was barred from social activities for two years after being found guilty of ‘spreading propaganda against the regime’. She was released temporarily after serving the first few months of her sentence, and was later informed she had been pardoned for Persian New Year.

Adya Expósito Leyva was released in March after serving over 11 months of an 18-month sentence, and her husband Ramón was released in June after serving 14 months of a two-year sentence. They had both been imprisoned for removing their children, Ruth and Joel, from the state-run school system due to teacher-led bullying because of their family's faith.

For most of his imprisonment, Ramón was placed in a maximum-security unit where he was denied conditional freedom and was permitted only one visit per month.

The National Supreme Court of Justice ruled in favour of a group of Jehovah’s Witnesses who had been forced out of their homes because of their beliefs.

In December 2017 the group was violently removed from their homes in Tuxpan de Bolaños, Jalisco State, along with several Protestant Christians, after they refused to participate in some community activities because of their religious beliefs. They’d then had to live in temporary accommodation.

The Supreme Court ruled that they must be reintegrated into a different plot within the territory of their communities, and ordered the state authorities to guarantee their safety while that happens.

The UN Human Rights Council (HRC) voted to extend the mandate of the Special Rapporteur (SR) on human rights in Eritrea for another year. Eritrean officials are deemed to have been committing crimes against humanity, the most serious human rights violations, since 1991. Human rights, including freedom of religion or belief, are regularly violated – yet Eritrea is in its second year as a member of the HRC. The SR is the UN’s expert on Eritrea’s human rights situation, and their work is the only independent, international means of monitoring and exposing the truth about how Eritrea treats its citizens. Ultimately, this is how the government can be held accountable.

Every year the SR’s mandate comes up for renewal, and every year CSW staff and others work hard to persuade the 47 member states of the HRC to vote for the renewal. This involves meeting country representatives (currently via online video call) to present our latest findings on Eritrea. The core group of HRC countries that took the resolution for renewal forward concluded that ‘independent HRC scrutiny is essential.’

September: Cuba - Journalist and lawyer for the Rigals released

Roberto Quiñones Haces, a journalist and lawyer, was released after spending nearly a year in prison for his work reporting on the trial of Cuban pastors Ramón Rigal and Adya Expósito Leyva (see ‘Pastors released from prison’).

Mr Quiñones Haces, 63, was imprisoned on 11 September 2019 on charges of ‘disobedience’ and ‘resistance’ because of his work as an independent journalist.

During his imprisonment, numerous international human rights organisations, including Article 19, the Institute for War and Peace Reporting and Amnesty International, called for his release.

Pastor A Dao was released on 18 September after more than four years in prison. He was not expected to be released until August 2021. Pastor A Dao was arrested in 2016 while on his way to visit some members of his church following his return from a conference on freedom of religion or belief. In April 2017, Pastor A Dao was sentenced to five years in prison for ‘illegally taking people to Thailand’, a charge he denies. Pastor A Dao’s church has experienced ongoing harassment from the authorities.

In June 2020, Commissioner James Carr of the United States Commission for International Religious Freedom pledged to adopt Pastor A Dao as part of the Commission’s Religious Prisoners of Conscience Project.

In response to the pastor’s release, Commissioner Carr said: ‘I hope this release is a sign that the Vietnamese government is serious about improving religious freedom conditions and will release other individuals detained for their religious freedom advocacy, including Nguyen Bac Truyen.’

Releases in August of 101 members of the Muslim community, who had been detained since 2018, were followed by the releases in August and September of at least 64 Christians. They had been imprisoned without charge or trial because of their religious belief in Mai Serwa and Me’eter prisons for between two and 16 years.

The releases initially appeared to be linked to the spread of COVID-19. However, the prisoners had to provide guarantors and these guarantors could risk losing their properties, and even their own freedom, if one of the detainees leaves the country.

Moreover, just two weeks earlier, several Christians, including five church leaders and around eight women had been arrested in Asmara and Dekemhare respectively. According to one of our sources: ‘They [the government] cannot detain everybody, so they keep you for some time, hoping that you will become weak or frightened. Then they put in other people.’