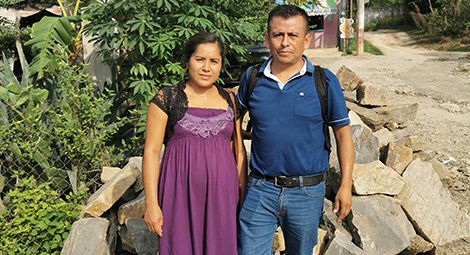 Forced from home because of their religion: Uriel and Adelina's story

In July 2019 four Protestant Christians were forcibly displaced from the village of Cuamontax Huazalingo in the state of Hidalgo, Mexico as a result of the ongoing harassment they had been experiencing since October 2018 on account of their religious beliefs. Uriel Badillo Lara and his wife Adelina Simón Pozos were among those forced to leave their homes. We spoke to Uriel to find out about the effect this has had on his family.

What is the situation of religious freedom in Mexico?

There’s a lot of discrimination for belonging to a religion different from the majority, especially in Hidalgo. The situation is difficult. When you’re a religious minority, the government doesn’t do much to support you.

Have you experienced religious freedom violations?

Have you reported the case?

I’ve reported it to the Public Prosecutor, but the government hasn’t done anything about it. The case was also submitted to the United Nations Human Rights Office [UN Special Rapporteur], but the government’s response didn’t address the specific questions raised. The discrimination against us is ongoing.

How has the coronavirus affected you?

The coronavirus has affected us a lot economically, and even more so because I do not have a permanent job. Here in Mexico, there are quite a few restrictions, we can’t congregate at church, and in my opinion, in practice, the guarantee of ‘religious freedom’ in Mexico is sometimes a dead letter.

You’ve had some good news recently. Can you share that with us?

God gave me a wonderful gift, the best I would say, he gave us a beautiful baby, and now we have the happiness of being parents. Because of our displacement we’re no longer recognised as community members of Cuamontax and were unable to register our baby’s birth there. Instead we’ve registered our baby in the municipality of Atlapexco.

If you could say one thing to our supporters about religious freedom in Mexico, what would it be?

We’d like to be able to return to our house, and that each individual can choose to believe whatever they like without being persecuted. We want people not to be harassed to pay for Catholic religious holidays that are celebrated in Mexico. That the persecution in my country would end, and that my daughter can choose her beliefs with all the freedom guaranteed by the Mexican constitution without her facing discrimination or persecution.

Pray: Please pray for Uriel, his wife Adelina and daughter Zurisadai. Pray that their situation is resolved and that they’ll have a place to call home.