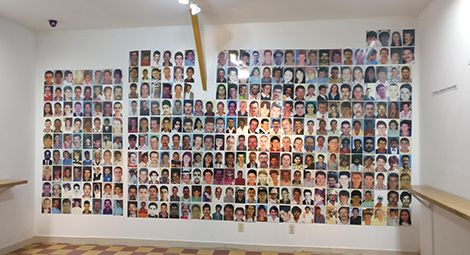 Planting seeds of hope amid conflict and COVID-19

30 November marked the fourth anniversary of the approval of a peace agreement between the Colombian government and the Revolutionary Armed Forces of Colombia (the FARC-EP) by the Colombian Congress. Four years later the country still has a long way to go, as violence continues in several departments and those working in peacebuilding find themselves increasingly targeted by armed actors. Add to this the effects of the COVID-19 pandemic and the picture is one of serious concern. CSW spoke to Pablo Moreno, Rector of the Unibautista Baptist Seminary in Cali and Director of the Colombian Council of Evangelical Churches Peace Commission (CEDECOL).

The COVID-19 pandemic has affected Colombia much like the rest of the world. There have been months of upheaval, and periods of lockdown have shifted many areas of human life into the virtual realm.

In the midst of this, violence has increased. Illegal armed groups occupying territories abandoned by the FARC-EP are fighting among themselves for control over drug trafficking routes. At the same time these groups are used to frighten the population to make them leave their homes.

One of the most serious problems facing the country today is the murders of social leaders and human rights defenders (HRDs), including individuals who signed the 2016 peace agreement. According to one NGO there were 251 registered murders in Colombia in 2020 [correct at the time of going to print], with the departments of Cauca and Antioquia most affected.

In these two departments there are a significant number of evangelical churches which are not immune to the effects of the worsening insecurity in their territories.

In Bajo Cauca Antioquia, an evangelical pastor who was targeted by a paramilitary group had to be relocated with her family after one of her children was targeted with threats and sexual violence.

On one hand, we recognise that the road to peace is long, tedious and dangerous, albeit encouraging.

For several years we have accompanied hundreds of victims of forced internal displacement (IDPs) who are active members of their churches in their new locations. We have learned that it doesn’t always end there. On several occasions, those we have helped have been displaced again just when they were achieving stability. In the midst of these circumstances, pastors, leaders, women and youth have emerged as leaders of their communities to maintain a hope of a better tomorrow. Their testimony has motivated others to continue working for peace.

On the other hand, churches and their leaders face restrictions on their ability to develop cooperative community actions and emergency care and development projects. In a context dominated by armed actors, unarmed civil society including the churches have lost their freedom to move from one location to another or to work on these types of projects. Those who don’t obey the orders of armed groups have been threatened, pressured, and prevented from holding religious gatherings.

Some IDPs migrate to cities as a result of the pressure from armed groups. Here various pastors have been threatened for coming alongside those who have been displaced, as IDPs are often monitored by informers who collaborate to ensure that they [the IDPs] are not recruited by a political or religious group that might prevent them [the armed group] from maintaining control.

Finally, it is important to highlight that progress has been made in the development of communities so that they can undertake initiatives that help them temporarily rebuild their economic situation. For several years now we have called these projects ‘seeds of hope’, which encourage churches and communities to maintain their faith and hope in the midst of the uncertainty produced by what they have suffered.