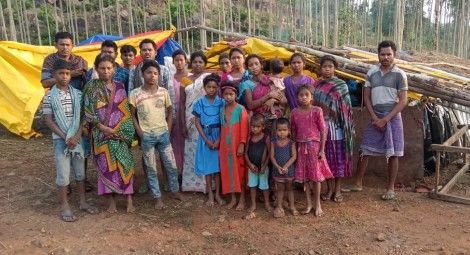 Members of the families displaced from Sikapai village

Ten Christian families in Odisha state forced out of their village

On 25 May, 10 Christian families, including young children, were forcibly displaced from their village in India’s Odisha state on account of their faith.

Odisha state is currently reeling under the effect of devastating floods, and the families have been forced find shelter in a nearby forest.

Tensions arose on 15 May when two women went to a nearby tube well to fetch water to prepare food for guests expected by a young family in Sikapai village’s Kalyansingpur block. A few villagers, who were Hindus, approached the women, tore their clothes, touched them inappropriately and told them that Christians were not allowed to use that well. They then proceeded to break the tube at the well so that the women were unable to access the water.

When the incident was reported, the police registered an FIR (First Information Report), which is required to open up an investigation. However, local sources say that there has been no investigation since then. The Christians reported the incident to the district and block administration as well, but they were told to go back to being Hindus and asked by the officials what use Christianity was to them anyway.

When the attackers heard that the Christians had filed complaints, they were angered, and on 25 May destroyed the roofs of six houses belonging to Christians and beat some of them up. Because of the floods, the houses were completely destroyed and the families were forced to find shelter using polythene sheets and wood in the forest outside the village.

Two weeks after the incident, they continue to live in fear, without light, water or a change of clothes.

CSW’s Founder President Mervyn Thomas said: “It is shocking and unacceptable that these families have had their homes destroyed and been forced to leave the village and shelter in the forest, in the heavy rains, with their young children. CSW is deeply concerned by the rise in crimes against minorities in India and the inadequate response from the authorities. Freedom of religion or belief is guaranteed in the Indian constitution, and no one should have to suffer for exercising this right. We urge the Indian government to enact measures to promote peaceful coexistence between different religious groups, and to ensure that all religious minorities feel safe to practice their faith.”